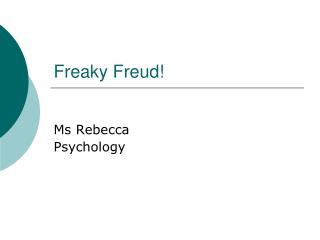 Freaky Freud!. Ms Rebecca Psychology . Review. 1. What is personality ? 2. What are traits ? 3. Is my perception of my personality different from others’? 4. Are personality tests ONLY measuring BAD traits? 5. According to the MMPI-2, what levels of the 5 traits do I have?.

Psychoanalysis - . a person is an embodied being located in a spatio -temporal structure of things and events, so having

Freud’s theory of personality - . this topic. apply the tripartite model to personality learn about psychosexual

Helene Cixous - . ◎ cixous was born in oran, algeria, to a multicultural jewish family that spoke german and french.

Carl Jung - . contacted freud in 1907 after reading interpretation of dreams freud selected jung to be his protégé to

Psych - Unit 8 - Freud &amp; Psychodynamic Theory - . what do you need to know? list and describe the 3 components

Sigmund Freud - Freud formulated one of the most comprehensive theories of human personality ever created. what is

Sigmund Freud - . sigmund freud was a jewish austrian neurologist who founded the psychoanalytic school of psychiatry.