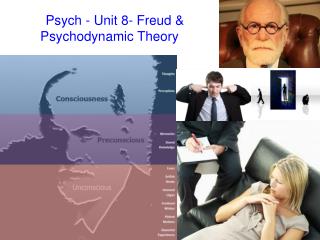 Psych - Unit 8 - Freud & Psychodynamic Theory. What do you need to know? List and describe the 3 components into which Freud divided the personality & indicate how these are distributed across the 3 levels of awareness. Explain the role of internal conflicts in Freud’s theory.