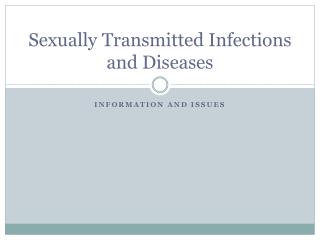 Sexually Transmitted Infections and Diseases. Information and Issues. STIs: facts and fiction. Myth Chlamydia is the least common of the STI Fact  Chlamydia is the most common bacterial STI in humans . Myth 1 in 100 adult Americans have an STI. Fact

Nursing Care of the Client: Sexually Transmitted Diseases ( STDs ) - . what are stds? stds are infections that are spread WHAT IS THE MAIN CAUSE OF CHLAMYDIA? - Chlamydia is a bacterial infection & is one of the most common sexually Common STD Symptoms for Women - Female std symptoms can range from none at all, to mild, to severe and vary drastically

STI’s - . any person who has sexual contact with another person risks contracting a sexually transmitted disease. sti