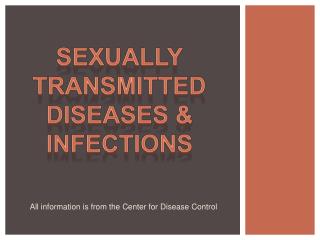 Sexually Transmitted Diseases & Infections. All information is from the Center for Disease Control. MYTHS OF STDs True or False. Most people with an STD experience painful symptoms. Birth control pills prevent the spread of STDs. Douching will cure and STD.

Nursing Care of the Client: Sexually Transmitted Diseases ( STDs ) - . what are stds? stds are infections that are spread

SEX &amp; STDs - . sexually transmitted diseases!. are not a joking matter!. have serious consequences!. if you are a