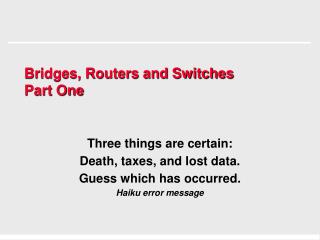 Bridges, Routers and Switches Part One

Bridges, Routers and Switches Part One

Introduction to Cisco Routers - . a picture of router. external connections on a 2600 router. internal components of a

BRIDGES OF GOD - . hungary 2011. seeing bridges. where we are. people we want to reach. bridge of god. understanding this

Hubs, Bridges, Switches - . hubs: repeaters, operating on bits when a bit comes into a hub interface, the hub broadcasts

Bridges - . what is a bridge?. bridges are made of steel and pure awesomeness. a bridge is an elevated structure designed

LAN switching and Bridges - . relates to lab 6. covers interconnection devices (at different layers) and the difference