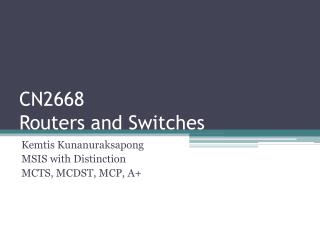 Building Gigabit-rate Routers with the NetFPGA: EuroSys Tutorial at University of Glasgow - . presented by: john w.

Getting Started with LAN Networks - . course objectives. upon completion of this course, you will be able to perform the

BGP in 2013 - . geoff huston apnic. “conventional “wisdom” about routing:. “the rapid and sustained growth of the