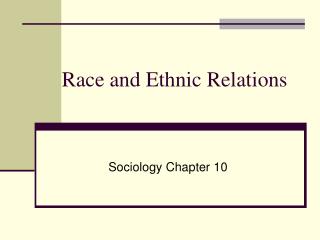 Race and Ethnic Relations. Sociology Chapter 10. 10.1 Race, Ethnicity and Social Structure. Questions to think about: How do sociologists determine the terms race, ethnicity, and minority group? What characteristics distinguish minority groups from one another?. Race as Myth and Reality. Relation between Ethnic Identity and Multicultural Attitudes for Latina - Cristina m. riscoelizabeth a.

Weltpolitik and the Navy The naval race with Britain and worsening relations - . connector. outcomes. all to know what

Ethnicity and Race - . part 2. learning objectives for ethnicity and race unit. 1. distinguish between race and ethnicity