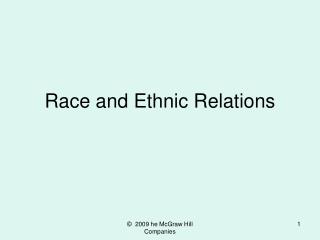 Race and Ethnic Relations Basic Definitions Race is a socially constructed category composed of people who share biologically transmitted traits that members of a society consider important. There are no biologically pure races.

Race and Ethnicity - . sociology. lesson outline. race and ethnicity defined what is a minority? racism , discrimination

Chapter 8 Racial – Ethnic Relations - . the problem in sociological perspective. prejudice is an attitude.

Racial and Ethnic Inequality - . lecture/discussion corresponding to assigned readings for week #6. i. the significance

Race, Ethnicity, and the Social Structure - . chapter 12. race. physical characteristics and whom others see as being a

Racial and Ethnic Inequality - . concepts and definitions . race is technically an anthropological or biological term it

The Ethnic Relations in Malaysia - . concepts of unity and integration. national unity refers to the uniting of various

Ch. 9: Race and Ethnicity - . race- a group w/ inherited physical characteristics that distinguish it from another group