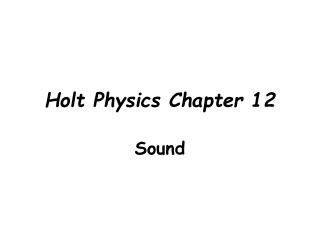 Sound Waves - . sound. ...a longitudinal wave in air caused by a vibrating object. produced by tiny fluctuations of air

Waves and Sound - . basic sound wave characteristics. sound is produced when something vibrates in a medium that can

Physics 1251 The Science and Technology of Musical Sound - . unit 3 session 31 mwf the fundamentals of the human voice.

Waves - . chapter 15 section 2. objectives. what are ways to measure and compare waves how can you calculate speed of a

Physics AP-B: Waves - . “waves seem to really confuse me, particularly what the variables refer to in the equations”.

Waves - . waves. waves play roles in our daily lives, including our effort to communicate. waves have parts and shapes