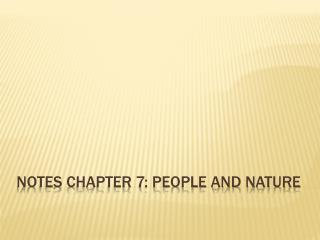 Notes Chapter 7: People and Nature. From its origins, human kind has had to deal with the challenges posed by nature. From nature, humans have always obtained their food, shelter and clothing. When nature acts harshly, bringing storms, droughts , or fires, people tend to respond.

The Nature of Matter - . chapter 1 biology 391. what is everything made of?. matter  anything that has mass and

Chapter 12: Nature and Classes of Contracts: Contracting on the Internet - . offer. contract. acceptance. definition of

Types of Physical Evidence Chapter 3 Notes - . bsapp.com. i can skills for the physical evidence unit. i can review the

Chapter 1B Notes - . -physical and chemical changes are usually accompanied by energy changes energy - the capacity to do

Chapter 1 People and Government - I. principles of government. a. the statearistotle was one of the 1st students of

The Nature of Organizational Behaviour Chapter 1 - . introduction to the course. this lecture series will be divided into