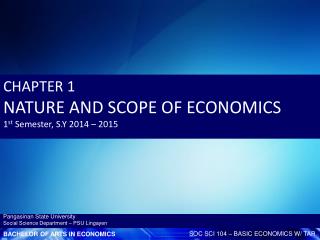 THE NATURE AND SCOPE OF CURRICULUM DEVELOPMENT (PHILIPPINE CONTEXT) - . by: prof. ronnie espergal pasigui. definitions of

CHAPTER ONE: WHAT IS ECONOMICS? - . objectives: fundamental economic concepts ssef1: the student will explain why limited

Economics of firms (cont.) - . the size, scope and development of firms. the firms search for value/ growth in a

NATURE AND SCOPE OF MARKETING - . 21. discuss the importance of marketing and its role in the economy. list the

It is Fun to Learn Economics - . http://www.youtube.com/results?search=ben&amp;sort=video_view_count or Macroeconomics : Branch of economics that studies decision-making for the economy as a whole - Definition. economics :