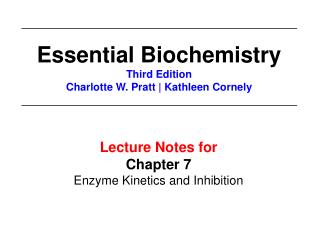 Chapter 13 Enzyme Kinetics - . outline. what characteristic features define enzymes? can the rate of an enzyme-catalyzed

LECTURE 2: ENZYME KINETICS - . general principles of catalysis. a catalyst lowers energy of activation by providing a

Enzyme Kinetics - . enzymes. what are enzymes? how do enzymes work (kinetics) how are enzymes used in reactors. enzymes.

Welcome to class of Enzyme Kinetics and Inhibition - . dr. meera kaur. learning objectives. to understand the

Enzyme Kinetics - . enzymes are proteins that can accelerate biochemical reactions by factors of 10 5 to 10 17 ! this is

Enzyme kinetics - . why study the rate of enzyme catalyzed reactions?. study of reaction rates is an important tool to

Enzyme Inhibition - . c483 spring 2013. questions. 1. an inhibitor binds to a site other than the active site of the

Enzyme Inhibition (26.4) - . inhibition is a term used to describe the inability of a product being formed due to the