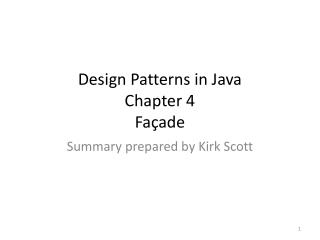 Design Patterns in Java Chapter 4 Façade. Summary prepared by Kirk Scott. Preliminary Note. This book takes the trouble to try and provide concrete examples This is a great benefit, and at the same time this approach has a shortcoming