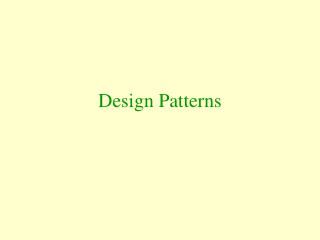 Design Patterns. Patterns. 1, 2, 3, … is a sequence that exhibits the pattern: The integers in their natural order. Another Sequence. 1, 3, 5, … The pattern: The odd integers, in order. What is a Pattern?. A template or model for imitation A dress pattern A cookie cutter

Introduction to Design Patterns - . for cse 3902 by: matt boggus. outline. why design? patterns (in general) design

Introduction to Design Patterns - . outline. why design? patterns (in general) design patterns. design. design is the