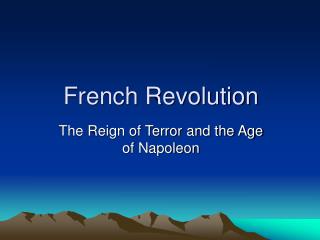 French Revolution. The Reign of Terror and the Age of Napoleon. Reign of Terror. The revolution was in crisis France was under attack from Austria, Great Britain, Prussia and others French Revolution - . titles and names. bourgeoisie- the leading urban professional and commercial classes of the third

FRENCH REVOLUTION - . chapter 23 section 1 &amp; 2. the old order. france was the richest and most powerful monarchy