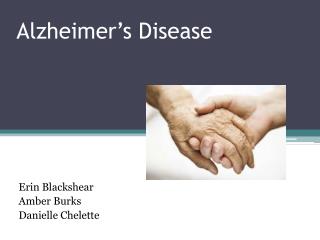 Alzheimer’s Disease - . by sarah chorn. why alzheimer’s? . topics to be covered. history of alzheimer’s

Should your elder with Alzheimer’s live with you? - Your dad has recently been diagnosed with alzheimer’s disease.

Alzheimer Disease - . the year 2006 is the centenary of the famous presentation of alois alzheimer which first described