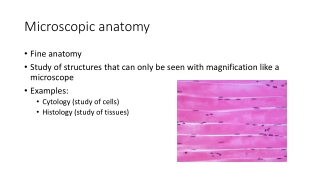 Microscopic Female Anatomy - . cross section of ovary. the development of follicles from their initial stage as a

Microscopic Anatomy of Heart Muscle - . cardiac muscle contraction. heart muscle: is stimulated by nerves and is

Microscopic Anatomy of Selected Male and Female Reproductive Organs - . testes. each lobule contains one to four

Microscopic Measurement - . q: how do you measure the size of a microscopic specimen? a: you will get a close estimation

Microscopic Ethics - . by: matthew sparks. history. in 1959, richard feynman proposed an idea that we could manipulate

Microscopic Life - . lesson 3. targets investigation 3. i can draw and describe observations made with a microscope,