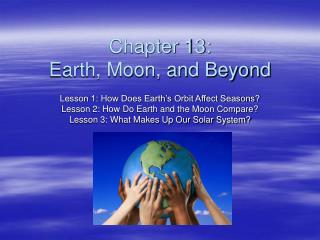 Chapter 13: Earth, Moon, and Beyond. Lesson 1: How Does Earth’s Orbit Affect Seasons? Lesson 2: How Do Earth and the Moon Compare? Lesson 3: What Makes Up Our Solar System?. Lesson 1: Vocabulary. Sun: star at the center of our universe. rotate: to spin on an axis. Chapter 7 Earth and the Terrestrial Worlds - . what do you think?. why are venus (too hot), mars ( too cold ) and earth

240,000 mi - . it takes light just over one second to travel from the moon to the earth. its nucleus is a single proton.

Figure 50.0x Earth from the moon - . figure 50.1 distribution and abundance of the red kangaroo in australia, based on