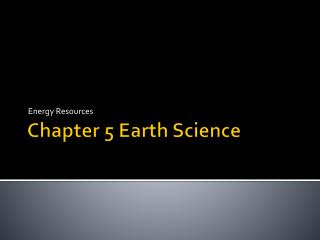 Energy Resources. Chapter 5 Earth Science. Natural Resources. Natural Resource – any natural material that is used by humans. Ex. Water, petroleum, minerals, forests, and animals. Most resources are changed and made into products that make people’s lives more comfortable and convenient.

Chapter #1 - . introduction to science. notes 1.1. what is science? science is observing, studying, and experimenting to

What is Earth Science? - . introduction to your world. bell ringer. the earth is a static planet that never changes and

Ch.1 Sec2 - . the study of earth science. sec 2. earth science is the term for this knowledge about earth and its place

Intro to Earth science - . mr. gift earth/environmental science. what is earth science?. the study of the earth and the