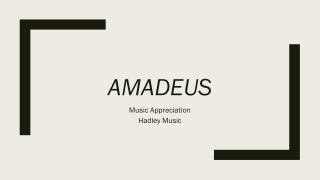 Amadeus. Music Appreciation Hadley Music. Previewing the Movie. Remember this is Hollywood! Some parts of the movie are fictionalized and some are true! After we watch the film, I’ll go through some of the True and False!. Who was Mozart?. AMADEUS - . a ntikaon m atter a t d a  ne: e xperiments with u nraveling s pectroscopy. 32 nd meeting of the lnf

Amadeus Association - . intermediary organisation gabriel peñuela. what is it? . a cross-border exchange programme.

Amadeus Air Reservation - . course objectives and agenda. please introduce yourself we would like to know …. name and