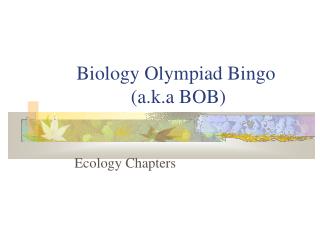 Ecology Chapters . Biology Olympiad Bingo (a.k.a BOB) ‏. A type of interspecific interaction that benefits one species out of the two . Shallow, well-lit waters close to shore in a lake . CRCT Review Bingo - . what is true of the offspring of organisms that reproduce sexually? a. they are genetically