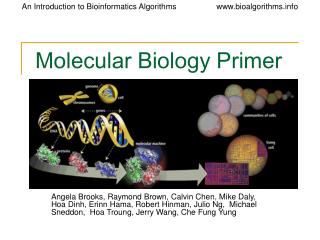 TECHNIQUES IN MOLECULAR BIOLOGY - . centrifugation- separation of molecules/macromolecules/organelles according to the

APPLICATION OF MOLECULAR BIOLOGY TO AGRICULTURE - . what are transgenic crops? steps in the development of transgenic

Biological Sciences 210 - Genetics and Molecular Biology - . fall, 2006. sequence of the cf gene. the 4 nucleotides in

A brief history of Molecular biology - . big names. charles darwin (1809-1882) on the origin of species by means of the

Molecular Biology Techniques – A Primer - . the methods depend upon, and were developed from, an understanding of the