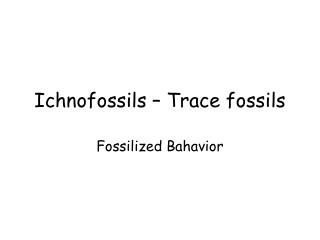 Ichnofossils – Trace fossils. Fossilized Bahavior. There is no branch of detective science so important and so much neglected as the art of tracing footsteps. Sherlock Holmes Sir Conan Doyle, A Study in Scarlet, 1801. Biogenic sedimentary structures or ichnofossils (Greek ichnos, trace).

Paleozoic Life - . life forms in the paleozoic. the paleozoic begins with the appearance of fossils of marine animals.

Earth Boot Camp - . 5.7d: identify fossils as evidence of past living organisms and the nature of the environments at the

Evolution: Evidence and Theory - . but first, a very quick cartoon show. nothing in biology makes sense except in the

The Trace Minerals - . chapter 13. the trace minerals – an overview. food sources depend on soil and water composition

Chapter 11 Trace Elements: Metals, Paints and Soil - . objectives: describe the usefulness of trace elements for the