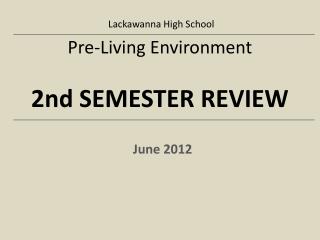 Lackawanna High School. Pre-Living Environment 2nd SEMESTER REVIEW. June 2012. Relative dating. Using index fossils that are found in layers of sedimentary rock to determine which layer is older than other layers. 1 . Sedimentary rock. Formed in layers; only type of rock to contain fossils. Pre-semester - . preclass0. do you have an iclicker to use for this term?. yes, i do!. press &amp; hold power (blue

A P 2nd Semester Final Review Jeopardy 2 - Help. (1) save a duplicate of this template.(2) enter all answers and

Semester Review - . german settlers clashed with other texans over the issue of a. empressario contracts. b. land prices.

Semester Review - . booker t. washington believed that the best way for blacks to improve their status in the united