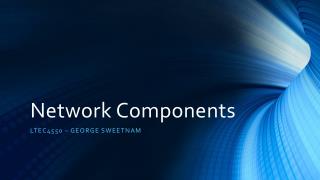 Network Core and Network Edge - . by muhammad hanif to bs it 4 th semester. now back to work ☺. ninety-nine percent of

Wireless Networking - . chapter 24. overview. in this chapter, you will learn how to discuss wireless networking

Network Components &amp; Terms - . by: bihu malhotra 10dd. hubs. it is a hardware device that is used to connect

Network Components &amp; How They Work - . what’s a wireless ap ? and why do i need one?. what are we learning

Networking devices - . what is a network?. networks. networks come in all sizes. they can range from simple networks

Networking Components - Ben sunny ltec 4550. networking components. table of contents. this presentation will give you a

Networks - . by saud , jude and lativia. network components. clients and servers. computer networks exist in many