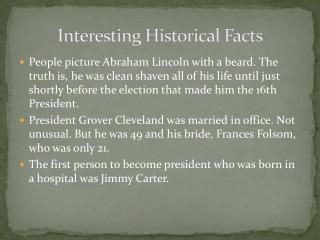 Interesting Historical Facts. People picture Abraham Lincoln with a beard. The truth is, he was clean shaven all of his life until just shortly before the election that made him the 16th President.

The Interesting In Between: Why Complexity Exists - . scott e page university of michigan santa fe institute

A Web of Knowledge for Historical Documents - . david w. embley. enabling search for facts and implied facts by

Psychological Therapies in the Modern Era - . centre for psychological therapies may 19 th 2009. may you live in

Approaches (Types) of History - . the question of how a historian approaches historical events is one of the most

Halophiles - . by aubrey mcdonald. overview. what is a halophile? diversity of halophilic organisms osmoregulation