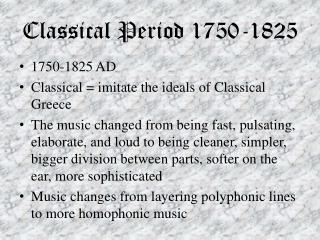 Classical Period 1750-1825. 1750-1825 AD Classical = imitate the ideals of Classical Greece The music changed from being fast, pulsating, elaborate, and loud to being cleaner, simpler, bigger division between parts, softer on the ear, more sophisticated THE CLASSICAL ERA 1750-1825 - . the classical style was a complete change from the baroque style. classical

THE CLASSICAL ERA 1750-1825 - . the classical style was a complete change from the baroque style. classical

The Classical period 1750 - 1820 - . final years of absolute monarchy in france prior to this era european states were

CLASSICAL 1750-1820 - . age of enlightenment. this period was one of the most dynamic in the history of europe. led the

Classical 1750-1830 - . what is classical?. the classical era is a period of music history, lasting from approximately

Classical Period - . 1750-1825. sonata cycle. four movement plan common in symphonies, sonatas, and other works of the

Classical Period - . the expansion of empires and integration of new peoples. periodization…up to interpretation.