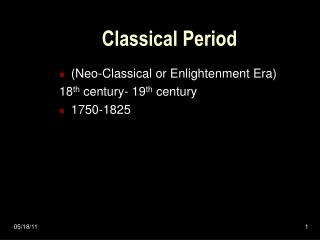 Classical Period - . 1750-1825. sonata cycle. four movement plan common in symphonies, sonatas, and other works of the

Classical Period - . the expansion of empires and integration of new peoples. periodization…up to interpretation.

Periods of Classical Music - . classical music is art music rooted in the traditions of western music. . baroque and

Classical 1750-1830 - . what is classical?. the classical era is a period of music history, lasting from approximately

THE CLASSICAL PERIOD - . 1750-1820. period of rationalization/age of reason french revolution: rise of lower and middle