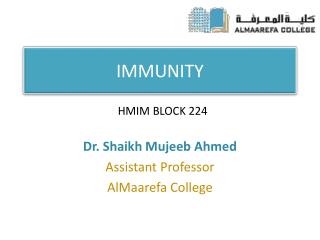 IMMUNITY IMMYNIZATION IMMUNITY - . active immunity are defenses developed by the body that last many years or even a life

Immunity - . trisha economidis, ms, arnp spring, 2014. war declared…. we are at war with our environment troops are

Immunity - . 6.6 vaccination. learning outcomes. students should understand the following: the use of vaccines to

Immunity - . what is immunity?. immunity is the body's ability to fight off harmful micro-organisms –pathogens- that

Immunity - Sovereign immunity. most common type of immunity defense usedneed to first consider if it is a governmental

IMMUNITY - . immunity. resistance exhibited by the host towards injury caused by micro-organisms and their products

Immunity - . it is the ability of the body to protect itself against foreign agents [i] natural [ii] acquired immunity