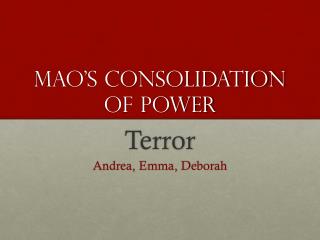 The Bolshevik Consolidation of Power - . how did the bolsheviks survive the first few months in power?. some reactions to

Nazi Consolidation Of Power - . www.educationforum.co.uk. peaceful factors. alongside the terror associated with the

Emergence of Mao Zedong - Mao's early life. his father was a farmer and was fairly well offmao was expelled from or asked

The Nazi Consolidation of Power 1933-1934 - Lesson objectives. by the end of this lesson you should:understand the

Emergence of Mao Zedong - . mao’s early life. his father was a farmer and was fairly well off mao was expelled from or

Rights Violations and Consolidation of Political Power III - . how is a relatively small number of elites able to create

Cult of Mao - . the mao cult revering mao in tibet during the cultural revolution. mao: cult of personality charismatic

Cult Of Mao - . what is a personality cult?. m ass media to create an idealized and heroic public image dictatorship