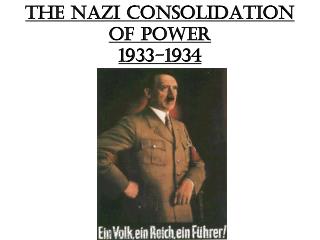 The Nazi Consolidation of Power 1933-1934. Lesson objectives. By the end of this lesson you should: Understand the strengths and weaknesses of Hitler’s position in 1933 Have begun to think about how Hitler consolidated his position as Fuhrer by 1934. January 1933. Hitler’s first cabinet The Nazi Consolidation of Power 1933-1934 - Lesson objectives. by the end of this lesson you should:understand the

Nazi Consolidation of Power - . revision. how did hitler consolidate his position as leader of germany? eight steps to

NAZI CONSOLIDATION - . of power. “in the deepest need hindenburg chose adolf hitler for reich chancellor. you too

Nazi Germany, 1933-39 - . revision: why were the germans unhappy with the treaty of versailles?. weimar republic. after

TAKEOVER OF POWER, 1933 - Between 1933 and 1945, the german government led by adolf hitler and the nazi party carried out