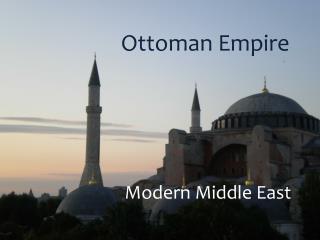 Ottoman Empire. Modern Middle East. Where did the Ottomans come from?. Name came from “ Osman ,” a leader of a western Anatolian nomadic group who began expansionistic moves in the 14 th century.

Why did the Ottoman Empire Create Reforms? - . to unite all it’s subject as citizens of the ottoman empire versus being

RISE &amp; FALL OTTOMAN EMPIRE - . when you hear, “the ottoman empire”, what comes to mind? (what pops in your

The Ottoman Empire - . aim: what was the source of the ottoman’s power?. homework: homework packet #2 due friday. the

The Ottoman Empire - . not always “the sick man of europe”. in the beginning. as the mongol empire fell, the muslim