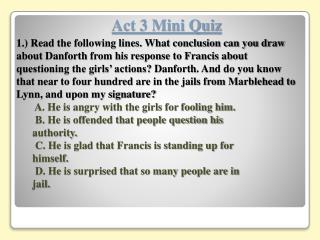 Act 3 Mini Quiz. 1.) Read the following lines. What conclusion can you draw about Danforth from his response to Francis about questioning the girls’ actions? Danforth . And do you know that near to four hundred are in the jails from Marblehead to Lynn, and upon my signature? Act 1 Mini Quiz - . 1.) reverend parris’s main concern about his niece abigail is that a. she is eating all of the food

Mini Quiz - . 1. behaviorists believe that all of the important causes of behavior can be found in an individual's a.

Mini Quiz - . 1. data that derive from the researcher's direct observation of what the subject does in some predefined

Mini Quiz - . 1) which of the following are found in dna and rna? a) phosphate groups, guanine and cytosine b) phosphate

Mini Quiz! - . how much money is jerry brown proposing to cut from higher education?. 1.4 billion dollars. over the

Mini Quiz - . 1. behaviorists believe that all of the important causes of behavior can be found in an individual's a.

Mini Quiz - . 1. julie is a serious and conscientious employee; however, with her friends at happy hour on friday

Mini Quiz - . 1. the factor analytic technique is designed to a. identify individuals who are attempting to lie or

Practice for Quiz Act 3 - . scene identification and he said, she said. which act and scene is this?. mercutio and tybalt

Act 2 Quiz - . after the party romeo decides he cannot go home. . romeo climbs up the wall bordering the capulets

Romeo andJuliet Events in Act 3 Quiz - . by chris and