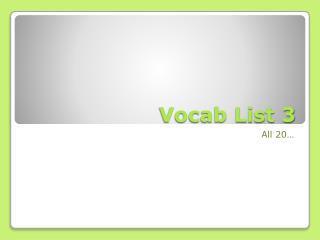 Vocab List 3. All 20…. Adj. slow and clumsy because of great weight The rhinoceros may look ponderous , but don’t aggravate one because they run quite fast when provoked!. Ponderous. N. Frustration; disappointment Vocab 3! - . “ yo , when i learn things i enjoy myself.”. unassailable. adjective the tree fort was assailable, so we