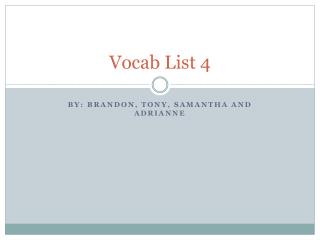 Vocab List 4. By: Brandon, Tony, Samantha And Adrianne. DISDAINFUL. Disdainful -(adjective) Expressing contempt, disapproval of something or someone who does n o t deserve respect. The Odyssey : “And one disdainful suitor added this: ‘May his fortune grow an inch for every inch he bends it!’”

Word of the Day - . dower 6 th grade language arts. word of the day overview. it is easy to memorize terms and their

Vocab List 1: Miscellaneous SAT words you should know - . 1. brevity (n) - conciseness (gets to the point) in speech or