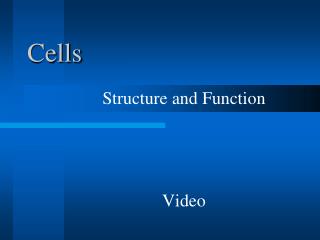 Cells. Structure and Function Video. Section 1: Introduction to the Cell. Discovery of Cells. The invention of the lens Robert Hooke (1665): observed a thin slice of cork (dead plant cells) with a microscope. He described what he observed as “little boxes” (cells ). Cells - . the building blocks of life. the cell is the structural and functional unit of all known living organisms. it