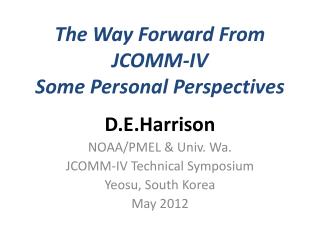 The Way Forward From JCOMM-IV Some Personal Perspectives

The Way Forward From JCOMM-IV Some Personal Perspectives

Cultural Perspectives of Intelligence - . lisa &amp; andrea. what do you think?. please take a moment to ponder your

Forward proton distributions and correlations. - (topical examples ). with a bit of personal flavour. tevatron, rhic and

Stranded - . list 4 things that your group would take with them if they were stranded on a desert island. be prepared to