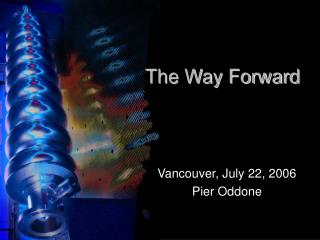 The Way Forward. Vancouver, July 22, 2006 Pier Oddone. Outline. Taking stock The way forward The way forward and Fermilab. It has been an extraordinary year…. Great progress on the design/cost by GDE Important support in the three regions US: “Raising above the Gathering Storm” THE WAY FORWARD - . or. who said research was easy ?. relationship between variables. y = (say) roughness after 5 years.

The Way Forward - . the future use of learning technologies in the university of brighton dr r stanier. the past

The Way forward - . sue hatt university of the west of england, bristol. overview. insights from economics whose business

The Way Forward - . our success with social media. what types of social media do we use. blog. we have made real advances

Way Forward - . key aspects what constitutes a business combination? who is the acquirer? what is the date of