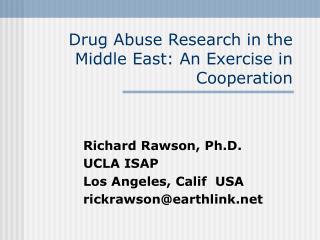 Drug Abuse Research in the Middle East: An Exercise in Cooperation Drug Abuse Research in the Middle East: An Exercise in Cooperation

Interaction of Street Drugs with HIV Medications - . understanding drug use. lets explore some of the predudices we share