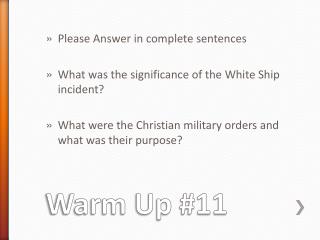 Please Answer in complete sentences What was the significance of the White Ship incident? What were the Christian military orders and what was their purpose?. Warm Up #11. Gothic Architecture, The Second Crusade, Gypsies and Redbeard !. European History: 1121 – 1212 AD.

WARM-UP - . warm-up # 1 where should i keep my science textbook? at your home. warm-up # 2 what are the first three

Warm-up - . answer the following question in your notebook after you write down the lesson name and objective: why and

Warm-up: - . come to the front of the room and pick up a pattern piece, a piece of tracing paper, and a tracing wheel.

Warm Up - . i will be collecting today  what impact did explorers and missionaries have on africa? how did africans

Standard Grade PE Revision Warm Up/Warm Down Brannock High School - . warm up before you take part in any activity,