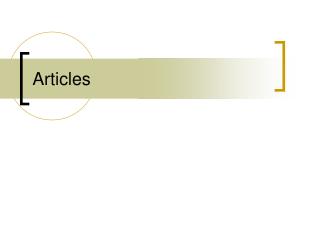 ENVM 7015 a) Importance of peer-reviewed journal articles b) Application of statistics in research - . types of journal

Chapter 7 - . forming a government. essential question. what were some of the strengths and weaknesses of the articles of

SCOPUS Searching for Scientific Articles - . by mohamed atani unep. about scopus. scopus covers all of the scientific

Federalism - . section 4.1 “the division of power between the federal government and the states”. first of all, what

AMERICAN HISTORY - . “ i won because i learned!”. american history. articles of confederation jeopardy!. articles of