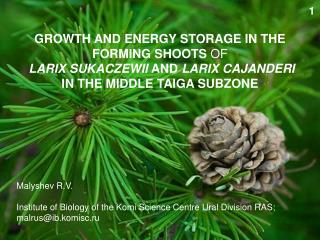 1. GROWTH AND ENERGY STORAGE IN THE FORMING SHOOTS OF LARIX SUKACZEWII AND LARIX CAJANDERI IN THE MIDDLE TAIGA SUBZONE. Malyshev R.V. Institute of Biology of the Komi Science Centre Ural Division RAS; malrus@ib.komisc.ru. 2. Surviving In The TAIGA - . by michael nejaime &amp; bailee

Animals In the Taiga - . by nikki b. abiotic and biotic in the taiga. there are lots of helpful biotic and abiotic in

A walk in the Taiga - . by: rebecca lacoretz &amp; anthony anderson. description . full of trees foggy some times

Tourism Growth in the Middle East - . indi, melina, vanya , and hafiz. . before we start…. 1990 iraq invaded kuwait in

Economic Growth in the Middle East - . ss7e7 the student will describe factors that influence economic growth and examine

Atomic Energy in the Middle East - . james winebrenner. issue. atomic energy is an energy brought on by the nuclear

Energy Storage and The Integration of Renewable Energy Into The Grid - . university of colorado at boulder department of

The Taiga - . biome research by selah jordan. the taiga geography and climate. the taiga is located in north america, e

The Taiga - . by lyla renwick - archibold equipo 3. where is the taiga found?. did you know that the taiga is the largest

The Role of Energy Storage in PV Projects - . produced by euci ● january 31, 2011. overview. why is electric energy