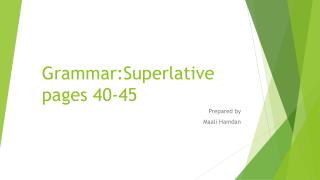 Grammar:Superlative pages 40-45. Prepared by Maali Hamdan. We use the superlative form of adjectives to show the highest degree of a particular quality that describes people, places, things, ideas, etc. She is the kindest person I know. That is the most expensive restaurant in Tel-Aviv. Unit One Grammar Practice - By kristi waltke a sentence is a complete thought. here are some sentences. i asked daddy

COMPARATIVE AND SUPERLATIVE ADJECTIVES - . grammar. comparative adjectives. we use the comparative to compare two people,

Grammar and Punctuation - . bellwork: copy down in your spiral notebook. notes in red independent practices in blue or

Aim: How does evaluation of comparative and absolute advantage help explain why nations trade? - . do now: defenition of

Comparative and Superlative Degree - . if we want to give degree or comparison lebih and paling (ter) toward adjective to