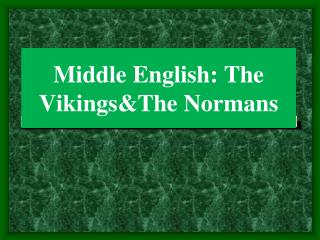 Middle English: The Vikings&The Normans. Viking Invasions. Most powerful people of their time 793 a.d. Vikings invade England They were at first merely plundering raids, but some fifty years later these attacks had become more serious and groups had even started settling in Britain. Norman Conquest - . 1066. the norman conquest changed the entire course of the english language. the origin of the

Conflicts and Change in the Middle East - . middle east:. physical setting. the middle east has been a crossroads for