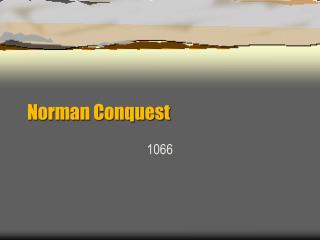 Norman Conquest. 1066. The Norman Conquest Changed the Entire Course of the English Language. The Origin of the Normans. Northern coast of France. Northmen of the ninth and tenth century. Understanding between Rollo of the Danes and Charles the Simple.

The Norman Conquest of Wales - . aims of the lesson. to understand why the normans wanted to attack wales to

The Norman Conquest of 1066 - . how a foreign bastard came to rule england. timeline: explaining the norman conquest.

The Norman Conquest of England - . contents. i. anglo-saxons and vikings ii. the battle of hastings iii c onsequences.

CHARACTER OF THE ‘NORMAN CONQUEST’ - . in scotland. arrival of the anglo-french. invited and encouraged to enter

The Norman Conquest of England 1066 AD - . who won the dispute?. duke william of normandy led an army of 6,000 across the

Conquest - . the game of tribal domination. each team will get 3 uncontested “freebies”. what does the 1 st “ a ”

CONQUEST - . mark 16:15 he said to them, &quot;go into all the world and preach the good news to all creation.

CONQUEST - . the game of tribal domination. round 1: each team will get 3 uncontested “freebies”. name that state

Moral Conquest rather than Physical Conquest - . stabilisation and counterinsurgency in french practices and doctrine in

The Conquest - . military regime and the royal proclamation. a game of charades. one word, four syllables first syllable:

Conquest Assignment - . conquest assignment. select a historic example of a person who is famous for their conquest. this