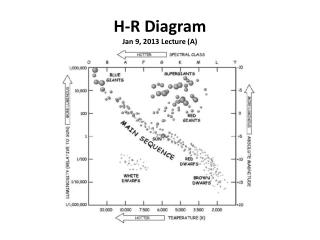 H-R Diagram Jan 9, 2013 Lecture (A). HERTZSPRUNG–RUSSELL DIAGRAM. The relationship between the luminosities and temperatures of stars was discovered early in the twentieth century by two independent astronomers.

8. The Classification of Stellar Spectra Goals : - 1. gain a working familiarity with the primary spectral types and

Stars - . … how i wonder what you are. goals. tie together some topics from earlier in the semester to learn about

The Nature of the Stars - . chapter 19. careful measurements of the parallaxes of stars reveal their distances. distances

Stellar Evolution - . by: brian smith 2ndp. interstellar cloud. at this stage cloud of dust and gas start to clump

Star Power! - . lighting up the night sky. when you look at the sky on a clear night, you can see dozens, perhaps even