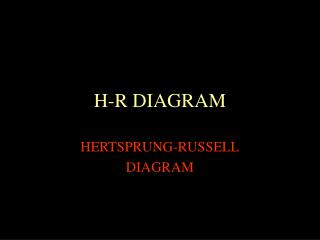 H-R Diagram - . absolute bolometric magnitude. the abm value includes all types of emr a star emits. the abm is the

The H R Diagram - . hertzsprung - russel. some stars are very big, others are very small. some are very hot and some are

The H-R Diagram - . in 1913, the american astronomer henry russel plotted the luminosities of stars versus their spectra

The H-R Diagram - . in 1913, the american astronomer henry russel plotted the luminosities of stars versus their spectra

The Hertzsprung-Russell Diagram (a.k.a. H-R Diagram) - . star classification. stars can be classified in three ways: size

Star Brightness and the H-R Diagram - . a star’s perceived brightness (how we see it) depends on three things: 1)

H-R Diagram Jan 9, 2013 Lecture (A) - . hertzsprung–russell diagram. the relationship between the luminosities and

The H-R Diagram: roadmap for stellar understanding - . no, it’s not harvard-radcliffe (sorry for the tiresome pun…),

R-H + Base  R: - + H-Base - Slides 2 through 6 introduce students to the acidity of terminal alkynes compared to other

Analyzing Starlight &amp; HR Diagram - . stars. star: a ball of gases that gives off electromagnetic radiation in the