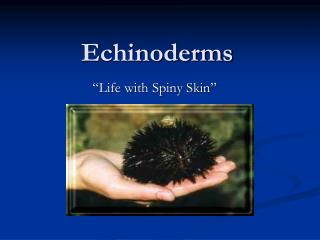 Echinoderms. “Life with Spiny Skin”. A Radical Radial Change. Worms, mollusks, and arthropods all have bilateral symmetry . So do echinoderm larvae. What kind of symmetry do adult echinoderms have?. Bipinnaria larvae (sea star). Radial symmetry What other animal phyla Echinoderms - . how are echinoderms adapted to their environments?. characteristics:. body organization:.

Echinoderms - . by: elisa trujillo. what is an