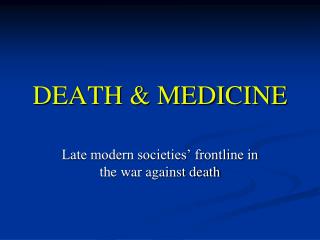 DEATH & MEDICINE. Late modern societies’ frontline in the war against death. MEDICINE TAKES CONTROL. Reflecting on the successes of the 20 th century Medicine inherits from religion the cultural responsibility to oversee final passage Death prevention as the primary goal of medicine Why is the PaCO2 equation the most important equation in all of clinical medicine? - . lawrence martin, m.d. clinical

Food as Medicine - 1. food as medicine. using foods to treat disease and to maximise optimal wellness by stephen eddey