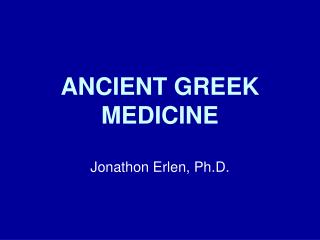 ANCIENT GREEK MEDICINE. Jonathon Erlen, Ph.D. We cannot really talk about medical "science" in these 2 civilizations, as their approach to ill health and medicine was religious rather than scientific as we use this term today.

Greek Medicine - . history of greek medicine. before hippocrates, medicine was based on myths treatment was based on

The History of Medicine - . an introduction dr h k lord. a tour through t ime. from a ncient civilisation to the

Education in ancient WORLD : Greek Contributions to Education - . by janice b. tehie. describe the geography of ancient

Hippocrates - . sarah schork. my scientist is hippocrates. hippocrates, also known as the ‘’father of medicine’’,

Hippocrates - . hippocrates of cos or hippokrates of kos (460 bc – c. 370 bc) was an ancient greek physician of the age

Greek Medicine - . history of greek medicine. before hippocrates, medicine was based on myths treatment was based on

Ancient Greek Philosophy: - . an introduction. what is philosophy?. “ philen ” is greek for love “sophia” is